Since launch, Indie Pogo has had a rich competitive history. The discovery of new techniques and character strategies have kept the scene alive, where routine tournaments help players test their skills against one another.

Quick Jumping was thought to be discovered by players, but Trevor Lowe talked about it prior to this "discovery". This technique is also taught by the Shopkeeper.

After taking a hit and being in knockback or tumbling animation, instead of falling flat on the ground, the parkour button can be pressed right before hitting the ground to instantly get in standing position and recovering from a fall. As of 3.0.7.2, Teching now gives about half a second of Invincibility frames, and also allows you to quickroll out of the squat. However, the timing was altered to prevent you from mashing the button to tech.

Quick Rolling is the result of an early implementation of the Rolling mechanic. When it was first implemented, rolling was either based on timing (with the window of the Quick Roll) or a set-distance roll if initiated while in Standing position. Rolling was then changed to be non-stop no matter what, but the timing-based roll still exists and thus results into the Quick Rolling technique.

By dodging diagonally upwards towards a wall, wall sliding, then walljumping (repeat this cycle), players can infinitely travel upwards to scale vertical walls and surfaces. This cycle is crucial for survival on Stages with low bottom blast zones or walls that travel all the way down, such as Canabalt Skyline, INK, and Retro Zone. It is a great recovery option if a player has expended all of their character's recovery tools.

Battle Of The Leap Lords

Battle of the Leap Lords is an officially organized monthly tournament held by Trevor Lowe and prominent members of the Indie Pogo Discord community. These events usually occur on the last weekend of every month, save for one or two exceptions.

This Tier list was created using results from a survey coducted by Tyler Conley. Characters within the same tier are ordered, and these rankings only reflect characters at a high level of play.

These tier lists are based on older versions of the game. They should not be used to judge a character's power level today, but do grant a look into the game's competitive history. 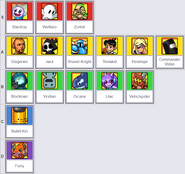 Tier list from earlier in 2.1.1.1. Created using results from a Discord survey made by Tyler Conley.

Tier list for 1.1.2.0. Created from results of Tyler Conley's State of the Game Survey, as well as suggestions from Munkee Haruka.

Tier list for 1.0.16.2. Created by Deep Gnome, winner of the first Indie Pogo tournament, and Volta. Results are likely not reliable due to the young age of the competitive scene.
Community content is available under CC-BY-SA unless otherwise noted.
Advertisement