Megaton
Fishy, or The Fishy is a character owned by Neon Deity Games and is an unlockable fighter. Fishy appears in the game Shütshimi.[1]

The Fishy is an orange fish with muscled arms. Equipped with a shotgun, Fishy fights underwater enemies in Waves of 10 seconds, which is the duration of their attention span. Fishy also happens to be a fish.

"Fishy is a muscle-bound fishy cursed with an incredibly short attention span. Armed with a bullet-morphing shotgun and an affinity for randomized power-ups, the task of defending the seven seas is an interesting one..or it would be if Fishy could remember." ― Fishy's Trophy Description

"After pounding through the scourge of the deep seas, Fishy found a magic red cape. In Indie Pogo, Fishy's cape is granted after launching out of the Fishbowl Cannon. It temporarily changes the properties of the neutral shotgun and the downward punch." ― Super Fishy's Trophy Description.

Fishy is one of the heaviest characters in the game, and as such, is usually slow and easy to hit. However, their kit hits hard, and they do have great initiation/escape options in the form of their midair jump and Fishbowl Cannon. Because of Fishy's Megaton weight class, their pogo attacks deal 4 damage rather than 3.

Side Melee : Fishy fires a cone-shaped blast from their shotgun. Deals 4 damage. Fishy can also use this move to bounce out of an arc from Fishbowl Cannon.

Up Melee : Fishy performs a front flip, hitting with the tip of their tailfin. Deals 6 damage.

Down Melee : Fishy performs a hard-hitting downward punch. This move deals 9 damage normally, and 11 damage and immediately drops Fishy downward if they are caped.

Neutral Special | Cannonball Shot : Fishy fires an arcing cannonball from their gun, dealing 5 damage. This projectile bounces on any surface it touches once. Afterwards, it will disappear.

Side Special | Fishbowl Cannon : Fishy curls up into a glass fishbowl cannon before firing out of it in an arc, dealing 6 damage on impact. While flying, Fishy wears a cape; using your side melee in this state will bounce Fishy back in the direction they came, while using your down melee will cancel all forward momentum and make Fishy quickfall as they punch. The angle of Fishy's launch can be influenced by moving the control stick.

Up Special | Deepsea Ascent : Fishy swims upwards a short distance. Fishy be controlled to the left and right during the ascent. This move can also be cancelled by any other move.

Down Special | Friendship Tether : Fishy launches a box downwards. If it lands on an opponent, they will take 4 damage and become tethered to Fishy. Pressing Down Special again breaks the tether, launching the victim towards Fishy at a set knockback.

Grounded Charge | Pump Up : Fishy stretches their muscles. When the move is completely charged, Fishy spawns a Fishlet surrounding them. Fishy can have up to 4 Fishlets around them. Each Fishlet will deal 2 damage and disappear when entering in contact with an opponent. Additionally, Fishy can interrupt their charge with a quick overhead punch, dealing 6-9 damage depending on charge time.

SUPER | Shütshimi : Fishy goes full throttle, gaining the ability to swim around freely and fire rapid shots from their gun. Pressing the Special button allows Fishy to fire arcing spikeballs. Each bullet deals 1 damage, while each spikeball deals 6 damage. If Fishy has any Fishlets, they will also fire bullets. 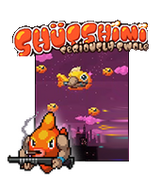