Jack is a character owned by Dream's Bell and is one of the 6 characters unlocked from the start. He comes from a game called Jack the Reaper.

Jack is a cute, little grim reaper, but do not get fooled by his appearance! As the Angel of Death, he had to go on a quest to save the world when the moon fell and brung upon it spirits of the afterlife.

"When the moon falls, bring the spirits of the afterlife to the mortal world, there's only one hero you should call on to restore the natural order. The Angel of Death: Jack the Reaper! By collecting the spirits of defeated foes, he can equip and combine weapons." ― Jack's Trophy Description

"Jack's quest forces him to adapt and overcome many diverse obstacles. One such example took place when Jack transformed into a motorcycle and was piloted by his new friend Poi Poi. Together, they faced off against Brando & Olivia in a Dead Heat race!" ― Jack's Hard Mode Trophy Description

As a starter character, Jack's simple moveset is easy to understand and pick up for new players. He excels at punishing approaches and playing defensively with his kit.

Hover : By pressing and holding the jump button after using his jumps, Jack can suspend himself in mid-air and slowly fall to the ground by hovering. Jack can only hover for a few seconds at a time.

Side Melee: Jack pulls out a lightsaber and swings it in an arc in front of him. Deals 4 damage.

Up Melee: Jack equips a sword and shield and slashes in an arc above him. Deals 4 damage.

Down Melee: Jack swings his scythe arms downward in front of him. Deals 4 damage.

Grounded Charge | Chainsaw Lunge: Jack whips out a chainsaw and leaps upwards. The chainsaw can hit enemies multiple times on its way up, as well as on its way down. Deals 1 damage per hit.

Neutral Special | Laser Scanner: Jack fires a bright laser that locks onto terrain and travels forward. The path of the laser creates a line of explosive pillars that rise up from the ground, dealing 6 damage to any opponent they come into contact with.

Side Special | Sickle Boomerang/Pollen Boomerang: Jack throws a spinning Sickle Boomerang that travels forward before slowly returning the direction it came from. It deals 1 damage but can hit multiple times, as well as having high knockback. If Jack catches the Boomerang as it returns, he will immediately be able to throw it again as a Pollen Boomerang, which deals 2 damage per hit. If Jack misses, he'll have to endure a short cooldown before using this move again.

Up Special | Double Drill: Jack equips a pair of drills and shoots upward into an arc. Holding the button allows Jack to keep the drills held out. Drills deal 2 damage per hit and hit multiple times.

Down Special | Spikeball: Jack releases a spikeball below him, dealing 7 damage. The button can be held to keep the spike ball swinging on the stage, dealing between 1 and 5 damage, based on movement. If Jack gets Pogoed, the spike ball disappears. If he uses it close to the ground, it will propel him up in the air, giving more vertical distance the closer he is to the ground. The Spikeball runs on a health meter that slowly depletes as it collides with players and terrain.

"If your in a match with 3 or 4 players, you should NAir (Neutral Aerial) from a slight distance, but if your in a 1v1 match or if your up close and personal in any, you should DAir (Down Aerial)." ― Breeky

"Jacks DAir is very useful on certain stages when used efficiently. Due to the way it moves you can maneuver it onto the other side of a wall to potentially hit you're opponent while being completely safe. Plus the utility of it bouncing you in the air if it hits the ground before coming back up the first time can be used to gain extra height without losing your air jump." ― Numb Knot

"After the patch, Jack has more trouble camping higher platforms with NAir. Try to close the gap with slowly approaching, mid-charge NAirs and roll kicks. Then try to build combos with stuff like roll kick -> DAir -> UAir -> NAir. When you have enough for a Super, use it up close and at an upward diagonal angle. This can help you get combos for 30HP or more off just one Super." ― ¿Query? 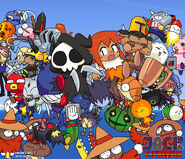 Game art for Jack the Reaper, showing his trophy pose alongside Poi Poi
Add a photo to this gallery

Retrieved from "https://indie-pogo.fandom.com/wiki/Jack?oldid=4580"
Community content is available under CC-BY-SA unless otherwise noted.