View source
watch 01:40
The Sandman Will Keep You Awake - The Loop
Do you like this video?
Play Sound

Sash Lilac is a rare water dragon known for her speed. She is one of the 3 playable characters in Freedom Planet, the others being Carol Tea and Milla. Her signature attack is her cyclone, allowing to her spin in the air and allowing float briefly.[3]

"Lilac is a half-water dragon, believed to be the last of her kind. She is known for helping someone in need without hesitation. Along with her best friend Carol Tea, she lives in a treehouse hidden deep within Dragon Valley, stealing off the rich to survive." ― Lilac's Trophy Description.

"Two years after her first adventure, Lilac is back! This time, she's facing off against a new foe, Merga, who has risen as a result of the Kingdom Stone's destruction. Lilac comes equipped with new moves, and a fashionable outfit." ― Hanfu Lilac's Trophy Description.

Lilac has a fairly simple moveset. She uses quick attacks, staying true to the fast nature of her game.

Side Melee: A move based on Lilac standard kick animation. Deals 5 damage.

Up Melee: Lilac does an uppercut, hitting enemies in an arc with her hair, dealing 5 damage. This attack can be angled to the right or to the left.

Down Melee: Lilac runs in the air, dealing 1 damage up to 6 times when kicking foes.

Neutral Special | Cyclone : Lilac uses her signature cyclone attack, Dragon Cyclone, where she spins using her hair as a weapon. It is a multi-hit attack, and each hit does 1 damage. It also gives her a small amount of extra airtime and height. It can be held, but this does not boost damage or height.

Up Special | Dragon Boost/Boost Breaker : Lilac's up aerial is her Dragon Boost. She goes into a ball, and then shoots into a direction, going quite far and dealing 1 damage up to 5 times.. While Lilac is in a ball, the player can pick a direction for Lilac's dash by holding that direction. Dragon Boost bounces off walls and the ground. With Dragon Star active, Dragon Boost goes much further and can hit up to 10 times, and the attack button can be pressed again at the end of the move to use Boost Breaker, which deals 5 damage. Unlike her original games, she is not invincible during this attack.

Down Special | Dragon Kick : Lilac performs a Dive Kick to the ground. However, unlike most Down Aerials that slam to the ground, it can be aimed to the left, right, or straight down. The damage is determined by how far she falls, with a minimum of 4 damage and a maximum of 11 damage. This kick can be canceled by air dodging. Canceling does not put Lilac into her free-fall state.

Grounded Charge | Dragon Star : When fully charged, Lilac jumps through a Time Gate, earning a Dragon Star that orbits her. While active, Dragon Star will power up Lilac's Side Melee and Up Special. Disappears if the latter two are used.

SUPER | Holodragon Rush : Lilac summons Holodragon (a hologram projected by Pangu). It deals 7 damage, and if aimed right can hit multiple times. The Super lasts 3 seconds. It always appears on the left of Lilac, and fires to the right while shifting up and down. When summoning, Lilac poses for a second before being able to move again. While Lilac is able to move during part of her super, she pays for it by having no invulnerability frames, even while posing, making the Super a risky move up close.

"Lilac became much better after her up-air buff. Pressing the attack button after a Dragon Boost releases a blue flash that deals 5 damage, and counts as a pogo. This means you can deal 11 damage from an up-air time. Because you get a pogo combo from it, you can combo out into any other move, including another Dragon Boost. However, she does have her weaknesses. With arguably the worst charge attack in the game and a predicable kit, Lilac can struggle against top tiers. She especially struggles with anyone who can out range her, as she lacks any projectile of her own and must rely on her speed to close the gap." ― error_72 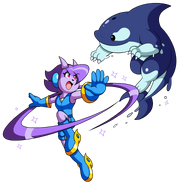 Newest Skin was originally made for Bandana Blue's Mod Project