Shop
The Marketplace is an in-game menu where the player can buy various things, try their luck with the Grand Gachamon or look at their trophies. It takes the form of a peaceful market village that comes from the game Samurai Blitz.[1] 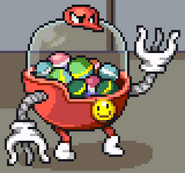 Getting a new trophy from the Gachapon.

The player can view the trophies that they have acquired through arcade mode and the Gachapon, as well as the number of each trophy collected. The Trophy collection can be ordered in alphabetical order, order of which they were unlocked, or by franchise that the trophies originate from. Selecting a trophy allows the player to find more information about the character that the trophy depicts and allows the player to view the trophy itself.

The Shop allows players to purchase playable characters, alternate skins for them, stages, online emblems and taunts with coins for use in-game. By selecting the "Talk" option, players are also able to ask for advice, change the items for sale or input a 7 character long alphanumeric code.

The Shop and Shopkeeper in Indie Pogo 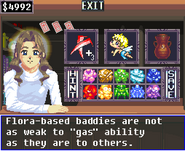 The Shop and Shopkeeper as seen in Jack the Reaper

Taunts: Attach this taunt to your player profile in the Options Office.

Emblems: Attach this emblem to your player profile in the Options Office.