Gachapon
Maxis a character owned by Renegade Kid and atooi and makes a cameo in Indie Pogo. He comes from the game Mutant Mudds.[1]

"Armed with heavy-duty water cannon, Max has what he needs to vanquish his long-term nemesis, the Mutant Mudds. Max has blasted and hovered his way across soiled landscapes in search of mysterious water sprites who hold the power to banish the Mudds away forever." ― Max's Trophy Description.

Maximillian comes from the Mutant Mudds franchise, a 12-bit action platformer series where you can leap into the third dimension by jetting between the background and foreground. 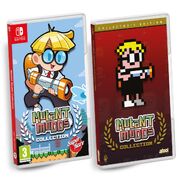 Max's full art and original sprite, both of which the trophy is based on
Add a photo to this gallery

Retrieved from "https://indie-pogo.fandom.com/wiki/Max?oldid=4792"
Community content is available under CC-BY-SA unless otherwise noted.