Gachapon
Moonman is a character owned by Ben Porter and makes a cameo in Indie Pogo. He comes from MoonQuest.[1]

"Moonman is a strange being who was summoned to a moonlit world, to bring light back to a dying planet. His body emanates a subtle green glow, which is useful since his journey begins underground. He tirelessly digs his way to the surface, crafting new items as he goes. Despite his cheerful demeanor, he feels no emotions." ― Moonman's Trophy Description. 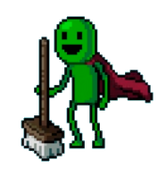 A clebratory mock-up in the lead up of the release of MoonQuest.

Moonman's trophy page, as seen in Indie Pogo".
Add a photo to this gallery

Retrieved from "https://indie-pogo.fandom.com/wiki/Moonman?oldid=5789"
Community content is available under CC-BY-SA unless otherwise noted.