Available from the start

1 main platform, 3 mini platforms, ceiling with spikes on the right.

Legal
Polar Dimension is a starter stage in Indie Pogo. It comes from VVVVVV, made by Terry Cavanagh.[1]

Developed by Terry Cavanagh, VVVVVV is a 2d platformer indie game, featuring Viridian. In this game, Viridian must find his scattered crew members after a “dimensional interference”.

Instead of jumping in the game, Viridian can reverse the direction of gravity when on a surface.

The upper part of the stage comes from a section in VVVVVV.

There is a ceiling above the main platform, stretching to the right and featuring spikes that deals 12 damage and usually bounces fighters straight to the bottom of the stage, where they get knocked out.

Polar Dimension as shown on the stage select display 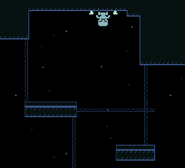 Retrieved from "https://indie-pogo.fandom.com/wiki/Polar_Dimension?oldid=5577"
Community content is available under CC-BY-SA unless otherwise noted.