This article is about content for Indie Pogo which didn't make it into the final game.

Main article : Bart
While Bart appears as a trophy in the final game, his playable appearance remains scrapped.

Heart is a character owned by AHEARTFULOFGAMES and was originally going to be a playable fighter in Indie Pogo. He comes from the game Heart & Slash and was scrapped due to rights issues.

Joy is a character owned by alpha six productions and was originally going to be a playable fighter in Indie Pogo. She comes from the game The Joylancer: Legendary Motor Knight and was scrapped due to being from an unfinished game.

Main article : Marine
The Marine is a character owned by Dodge Roll and was considered as a clone for Bullet Kin, both coming from the game Enter The Gungeon. This character was scrapped due to Trevor's dislike towards clones, believing it could open the doors to demand for more fighters like it, and being a lot of work to clone a character with a lower-play rate.


This fighter was planned to have several differences from Bullet Kin, including a unique gun loadout (though both characters could pick up guns from one another), Casey used for melees instead of Blasphemy and different side & up specials.

While the Marine is a trophy in the final game, his playable appearance remains scrapped at present.

The Marine in Enter The Gungeon.

Pilgor is a character owned by Coffee Stain Studios and was intended to be added as a playable fighter in Indie Pogo. She comes from the game Goat Simulator and was scrapped due to never being formally pitched before the studio was bought out by Embracer Group, formally THQ Nordic AB. Although it is still possible for her to be in the game, her chances has been reduced due to this. 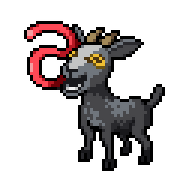 Rogue is a character owned by Pixelscopic and was originally going to be a playable fighter in Indie Pogo. She comes from the game Delver's Drop and was scrapped due to being from an unfinished game.

Walking was originally going to be a mechanic that allowed characters to walk across the ground. This would be done by holding the parkour button to stand and then using the control buttons to walk left and right. Characters could also jump out of walking. This new walking mechanic was first tested on Blockman. In the end however, this was replaced with the current parkour.

"First and foremost, because you have so much extra mobility, matches tend to last a lot longer, because no one's able to land hits on each other that well. With the ability to walk and run, the pacing of the matches just doesn't feel good anymore. Couple that with the fact that you now always have to hold the trigger in order to run, it kinda defeats the purpose of the autojumping and the game therefore loses its identity. Even more so, we found through play tests that your finger kinda gets tired from holding the trigger the whole time, which begs the question 'Well, should there just be a toggle?" ― Trevor, explaining why the walking mechanic was originally removed.[1]

However, walking made a return in Patch 2.1.0.0. As part of the newly added Augments, players can equip a Heavy Metal augment which allows the character to walk on the ground. This is currently only available to Blockman, Bullet-Kin, Jack, Velocispider, and Viridian.

These type of augments would have had no impact on gameplay, but instead give players different visual effects when roll kicking or jumping.

The Megahand and the Heroine, two charge guns, were planned to be added to Bullet Kin's chest, but they couldn't get in due to time constraints.

Table Techs, such as Table Tech Rocket, were also considered to appear in chests, but were scrapped due to time constraints and Bullet-Kin already being a very complex character.

For his up special, it was considered to use the Alien Engine or the Balloon Gun, but it was scrapped in favour of Bullat Wings.

For his Side Special, Bullet Kin was able to shoot forward. It was scrapped in favour of the aiming mechanic.

Originally, CommanderVideo was able to aim his paddle in 3 directions (up, left and right), but he couldn't create beats out of it. The devs tried to make it shoot sideways, but it was too similar to Shovel Knight's Flare Rod. This feature was scrapped as it didn't fit CommanderVideo's kit.

Three sprites that have been found in the sprite sheet since patch 2.0.0.0 show Diogenes's cauldron in what appears to be three different states of damage. According to the developers, the pot was originally intended to break upon receiving too much damage. It was scrapped as they didn't want to create a new fiction of what Diogenes has beneath the pot.

Jack's neutral special was originally his Laser+Pollen ability, which spawned sword-like lasers constantly as the button was held and dealt multihit damage. This was scrapped for balancing purposes.

Originally Lilac had a counter move for her neutral special, that being the Blink Dash. It was scrapped, as Trevor didn't like counter moves (as they "feel cheap/overly defensive"), but they kept the dash for her Side Special.

Shield Knight was planned to fight alongside Shovel Knight, making him similar to Smash Bros' Ice Climbers. However, she was scrapped, as it didn't work very well with the limited pre-Heavy Metal movesets.

Originally, Shovel Knight's down special was planned to be a dive, similar to Blockman's or Bullet Kin's. It was scrapped in favor of Fishing Rod.

Prior to version 3.0.8.0 of the game, Welltaro had the Candle upgrade as one of the ten upgrades able to be selected when using Timevoid, the item in question increased invincibility time after taking damage. After this update, though, it was swapped out for the Rest in Pieces upgrade.

The Nitrome stage was announced on 11th October, 2017 during the video "Indie Pogo Kickstarter : The Grand Finale" by Trevor Lowe:[2]

"Rather than pick one fighter to represent all of the games, instead we're gonna create a stage that incorporates a ton of elements from the variety of Mobile and Flash games. Think of it as the Pokémon Stadium of Indie Pogo." ― Trevor Lowe

Eventually, this concept of incorporating Nitrome's games was reworked into Yolk and his moveset.

Kerfuffle: Removed due to the game's cancellation.

Super Dangerous Dungeons: Removed and replaced by the current version of the trophy.

Where the Moon Goes At Night: ProsciuttoMan, the game's developer, stated a trophy was discussed but scrapped in favor of a potential trophy from his other game, Beetle Ninja.

Flappy Bird: Teased during the game's Kickstarter, but removed for unknown reasons. This leaves Flappy Pipeyard as one of two stages to not have a corresponding trophy (alongside Canabalt Skyline).

The unused sprite for Quark, the main character for Kerfuffle. The trophy was removed due to the game's cancellation.

A old version of Timmy's trophy sprite, before Trevor updated it to include a better pose.

DISCLAIMER: Please remember that content pitches made by anyone outside of Lowe Bros. Studios is not advised, as it is very likely to deter certain studios.

A handful of pitches have been made to several different studios throughout the game's development.

Beginning in the game's pre-release period, several characters were illustrated as pitches. Those with a star present above their portraits were to be included in the final game, although some of these characters have yet to appear in any form.

Castle Crashers is a 2008 beat 'em up sidescroller by The Behemoth. A pitch for the game's knights was released, revealing that the playable representative from the game was going to be "Green Knight" brandishing what appears to be the game's "Thin Sword" (the knight's starting weapon).

It was revealed by Lowe Bros. that the characters' inclusion was neither supported nor dismissed by The Behemoth.

Rocket League is a game by Psyonix, with gameplay that can be described as "soccer with cars". A pitch for the game's default car (known as Octane) was made, likely in response to a meme started by the YouTuber Alpharad in regards to the indie platform fighter, Rivals of Aether (which is represented in Indie Pogo).

Although Octane has been neither confirmed nor deconfirmed, it's chances are weakened due to Psyonix being bought by Epic Games. However, public interest was renewed recently due to a Twitter exchange between Lowe Bros, Rivals Of Aether and Psyonix.

Spelunky is a 2008 platformer developed by Derek Yu. A pitch for the game's protagonist, Guy Spelunky, was made. It appears to have been unsuccessful, as no official comment by either Derek Yu nor Lowe Bros Studios exists.

An official collaboration between Lowe Bros. and ProsciuttoMan, several characters owned by Nicalis were displayed in an Indie Pogo aesthetic. Though met with great enthusiasm by fans, this pitch appears to have been unsuccessful.

Although not directly deconfirmed, due to controversies surrounding Nicalis in late 2019, it is unlikely that any franchise owned directly by Nicalis will appear in Indie Pogo currently.

Despite this, during a November 10th Q&A held by Edmund McMillen, McMillen stated the inclusion of characters from The Binding of Isaac and its spinoffs were indeed possible (although it may be necessary to point out that this is due to the rights of the game on PC being owned by McMillen).

Before the eventual PC / console development began, Indie Pogo was originally envisioned as a mobile game. This version of the game was also not a platform fighter, focusing instead on racing to collect the most coins. Tilting the phone would cause the character to move, while swiping and tapping the screen would be used for directional specials. However this plan was changed to PC / console due to mobile connectivity; Bluetooth hadn't developed enough to allow for the matches the game was intended for.

This concept, while created around 2012, showed the early intentions for the cameos to be featured in the game. Many of these are currently represented, planned to be or scrapped from the PC release, but also includes other characters such as Alchemist (Savant), Rusty (SteamWorld), Gomez (Fez) and Lost Kid (Limbo). Many of these cameos were never pitched and only appear in mockups for testing purposes.

Real pogo sticks were considered briefly, but were too difficult to design moves around

Battle mockup on a Shutshimi-themed stage

Battle mockup on a Stardrop-themed stage

The unused character select screen. This was scrapped due to the scoreboard's size.

The unused stadium for the title screen.

The placeholder island for an "Extras" menu.

Old menu icons that were used in the alpha of the game. They were in the place where the "PRESS A" note is today.

The unused icons in action.