Heavyweight
Shovel Knight is a character owned by Yacht Club Games and is one of the 7 characters unlocked from the start. He appears in his eponymous game, Shovel Knight: Treasure Trove.[1]

Shovel Knight is a knight wearing a blue armor, the Stalwart Plate, and wielding his weapon of choice, the Shovel Blade. In Shovel Knight: Shovel of Hope, his own campaign, he goes on a quest to rescue Shield Knight who was sealed in the Tower of Fate, and will encounter many enemies and challenges along the way, like the Order of No Quarter: A merciless Order of villainous knight volunteering to seize control over the land.[2]

"A practitioner of the ancient code of Shovelry. Shovel Knight can do almost anything with his signature weapon: the Shovel Blade. He uses it to mercilessly attack, dig up treasure & bounce on foes in search of his long lost partner Shield Knight, against all odds." ― Shovel Knight's Trophy Description.

"What better way is there to spend your treasure than on gold-plated armor? The Ornate Plate is the most expensive armor Shovel Knight can buy, even though it's functionally useless. Wearing it allows Shovel Knight to perform acrobatic flip jumps, however." ― Ornate Plate's Trophy Description.

Shovel Knight is a slow and heavy, but hard-hitting character that can take a bit of practice to get used to. He has a special property that no other characters have: His Shovel Drop, used by holding the control stick down, is an alternative to the Pogo Attack, by which he can retain his Pogo Combo.

Shovel Drop: The Shovel Drop is Shovel Knight's unique trait. By holding Down to do a Shovel Drop, the player is able to jump off enemies to do 1 damage. It is quicker, but weaker than a Pogo Attack. The Shovel Drop cannot be performed while in helpless state. It can be used to bounce off the floor and keep a Pogo Combo instead of landing and cashing it. Shovel Dropping on an opponent doesn't reset the air jump nor any move, but Shovel Dropping on the ground does.

Side Melee : Shovel Knight uses his trusty Shovel Blade to perform a Dig Slash and inflicts 5 damage. This move can reflect projectiles such as Teslakid's Ball Lightning and Penelope's Vampire Mines. Any projectiles Shovel Knight reflects with this move fall under his ownership.

Down Melee : Shovel Knight points his Shovel Blade to the ground, extending it downwards. Deals 4 damage with decent downward knockback. This move can be used in conjunction with Shovel Drop to give it extra height.

Up Special | Infinidagger : Shovel Knight uses his Propeller Dagger to lift high into the air. This attack deals a minimum 5 damage and a maximum of 10 damage when ascending. Holding the button will lift him even more and make him hover in the air for a few seconds. In this state, if an enemy touches the tip of the dagger, it will deal 3 damage.

SUPER | War Horn : Shovel Knight uses his War Horn and blows around him, dealing 1 damage multi-hits in rapid succession to anyone in its radius. Shovel Knight is vulnerable during his Super, however, but can move around freely while it is active.

This is Shovel Knight's Match-Up Chart as of Patch 2.1.1.1 made by Bandana Blue. The chart is not ordered, and it only reflect characters at a high level of play. 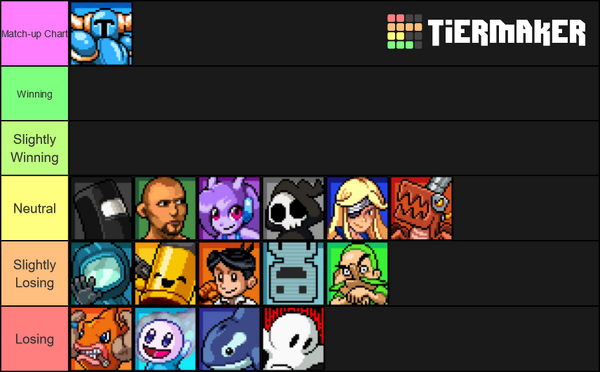 Two sprites from a scrapped move for Shovel Knight.

Original artwork from Shovel Knight.
Add a photo to this gallery

Retrieved from "https://indie-pogo.fandom.com/wiki/Shovel_Knight?oldid=4862"
Community content is available under CC-BY-SA unless otherwise noted.