Gachapon
Spark is a character owned by LakeFeperd (Feperd Games) and makes a cameo in Indie Pogo. He comes from the game Spark the Electric Jester.[1]

"Spark entertained many in his career as a jester...that is, until he lost his job and was replaced by a robot version of himself, Fark. In a strange twist of fate, robots soon began attacking cities around the world, leaving Spark no choice but to stop them." ― Spark's Trophy Description.

Spark is a Formie (an alien species), and an electric jester. His adventures take strong inspiration from classic videogames such as Sonic the Hedgehog, Kirby and MegaMan X. 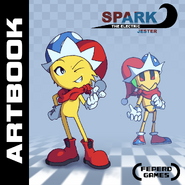 Retrieved from "https://indie-pogo.fandom.com/wiki/Spark?oldid=4818"
Community content is available under CC-BY-SA unless otherwise noted.