Supreme Skins are special, non palette-swap costumes that are obtained through various events. These costumes are often based off special outfit a character can wear in their game of origin, another similar character, or brand new appearances altogether. From a gamedev perspective, additional costumes requires to create entirely new sprites, sounds, or particles.

Some Supreme Skins can be bought through paid DLC on Steam, to help support the team behind Indie Pogo.

An armor Shovel Knight wears in Shovel Knight : Shovel of Hope. This skin adds shiny particles and can be bought in the Shop for 7777 coins. This outfit also has its own trophy and was released at launch.

Ornate Plate's trophy page
Add a photo to this gallery

The Hanfu dress that Lilac wears in Freedom Planet 2. This outfit has its own trophy and was released on July 24th, 2018.

Hanfu Lilac's trophy page
Add a photo to this gallery

"This is the Prisonbreak Zorbie skin, which reflects his appearance when he first exited incarceration. While it is purely cosmetic, enjoy hitting your foes with the naughty french convict!"

― Steam DLC Promotional blurb.Zorbié with a prisoner outfit. The winner of the Zorb-Off, Munkee Haruka, got it for free on October 13th, 2018. Released October 15th, 2018 on Steam. 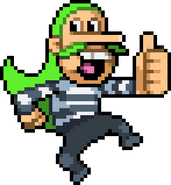 "This is the Skeleton Velocispider skin, which reflects the appearance Velocispider takes on when he loses all his HP in his original iOS title. While it is purely cosmetic, enjoy hitting your foes with this spooky skin just in time for Halloween!"

― Steam DLC Promotional blurb.A skeleton variant of Velocispider resembling their death animation sprite, which also has its own trophy. Released on October 30th, 2018 on Steam.

Skeleton Velocispider's trophy page
Add a photo to this gallery

"Frogtaro skin as requested by our discord server! Get it now to jump like a frog and fight like a champ!" ― Steam DLC Promotional blurb.

The highly requested Frogtaro costume, first envisioned and sketched by user bedoop. Green Welltaro dons a frog hood, as does his ammo bar. Released on May 7th, 2019 on Steam.

Thumbnail image for Frogtaro on Steam

Frogtaro as he appears on the character select screen 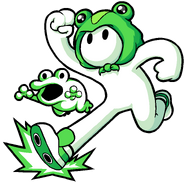 Promotional art for Frogtaro, made by Tyler (AKA Dead Line)
Add a photo to this gallery

"This is the Sunfire Stardrop skin, which turns our happy hero into a fiery ball of rage. While it is purely cosmetic, enjoy hitting your foes with fireballs instead of stars!" ― Steam DLC Promotional blurb.

Stardrop is covered in a scorching flame that carries on to his star powers, burning opponents with literal fire works. Released on May 7th, 2019 on Steam.

Sunfire Stardrop as he appears on the character select screen

Promotional art for Sunfire Stardrop, made by Tyler (AKA Dead Line)
Add a photo to this gallery 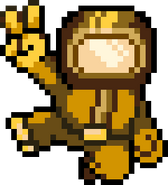 A special, Kickstarter-exclusive skin for Stardrop. Green body, replaces their titular trail with a money trail. Released August 13th, 2018 to all backers who pledged high enough.

Stardrop with an ever-changing colored body.

All of Rainbow Stardrop's colors
Add a photo to this gallery

Lumina from World to the West as an additional costume for Teslakid.[1]

A costume Octodad wears in the intro sequence of Octodad: Dadliest Catch.

Supreme Skins, labeled "Additional Costumes" on the Kickstarter page
Add a photo to this gallery

Retrieved from "https://indie-pogo.fandom.com/wiki/Supreme_Skins?oldid=4330"
Community content is available under CC-BY-SA unless otherwise noted.