Lightweight
Velocispider is a character owned by Retro Dreamer and is an unlockable fighter. They appear in their eponymous mobile game, Velocispider.[1]

Velocispider is an half-spider, half-velociraptor creature, with a velociraptor head and spider legs. These Araknasaurs have mechanical parts and are equipped with the Head Cannon. In Velocispider, they had to defend their eggs from the Evil Corporation.

"Velocispider is a lethally dangerous specimen called an Araknasaur. The evil Robot Seafood Corporation found this out the hard way when they attempted to steal it's coveted eggs with an onslaught of weaponized Aquabots. Nobody messes with Velocispder's eggs." ― Velocispider's Trophy Description

"This is the price you face when you protect your eggs from the assaulting Aquabots, the reminder of Velocispider's mortality. In Indie Pogo, every fighter has their own unique death animation when their HP reaches zero, recreated from their original games." ― Skeleton Velocispider's Trophy Description

Velocispider is the first unlockable character. In fact, you can even unlock them right from the start as they only costs 50 coins. As such, they are a really simple character to understand and to play. Their Neutral Aerial and Grounded Charge share the same amount of charge, which is a unique mechanic. Velocispider is about keeping the opponent above them and shoot projectiles before they Pogo them, making it a risky but rewarding character.

Up Melee : Velocispider releases an explosion above them that deals 4 damage.

Down Melee : Velocispider turns upside-down and and fires a downward blast, dealing 4 damage.

Grounded Charge / Neutral Special / Side Special | Charge Shot : Velocispider shoots a blue projectile in the air, dealing 1 damage uncharged and 10 damage fully charged. This move can be charged in the air and on the ground, and the hitbox grows in size when charged. While in the air, the player can tilt Velocispider up to 90 degrees to the left or right in order to fire more horizontally.

Up Special | Plasma Trail : Velocispider shoots an electric arc that can be aimed. When the button is released, they will teleport to the tip of the arc and cause a round explosion. Velocispider travelling on the arc deals 3 damage, the explosion deals 6 damage, and comboing one into the other is pretty easy.

Down Special | Jet Cannon : Velocispider drops downward, dealing 6 damage and spiking the enemy. The move can be used offstage to carry the opponent and do a suicide KO. Opponent can mash out of it.

SUPER | Omega Laser : Velocispider shoots a huge laser doing 3 damage and really good knockback. It covers the whole stage vertically, and they can move during the Super. The Super lasts 5 seconds. However, Velocispider is vulnerable and cannot double jump during the Super, any jump over a pit will be, in fact, deadly, due to the heavy recoil of the laser.

Parkour : Velocispider is able to walk on walls using the parkour button. They can also use their Grounded Charge while on a wall.

Trevor and Jaron Lowe both said during the Indie Pogo launch day livestream that Velocispider's recolors were based on Metroid's Samus' alternate costume in Super Smash Bros..[2]

Newest Skin was originally made for Bandana Blue's Mod Project 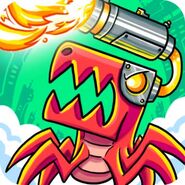