Voltar is a character owned by Ronimo and is one of the six upcoming DLC characters. He comes from Awesomenauts.[1]

Voltar comes from a free game called Awesomenauts, a character-based 2D multiplayer online battle arena where the goal is to destroy the enemies' Solar Collector located within the enemy base before they do the same. 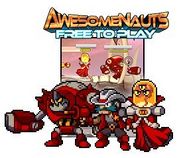 Origin of Voltar's character art, from Awesomenauts
Add a photo to this gallery

Retrieved from "https://indie-pogo.fandom.com/wiki/Voltar?oldid=4526"
Community content is available under CC-BY-SA unless otherwise noted.